Sewing for my man! Ain’t he cute in his Negroni shirt?

I haven’t made anything for my guy in a while so I decided it was high time to try out the Colette Negroni shirt for him. I LOVE this pattern! I was worried since he is long and lean that the fitting would be off, but with some adjustments I think I nailed it! Isn’t he a stud? 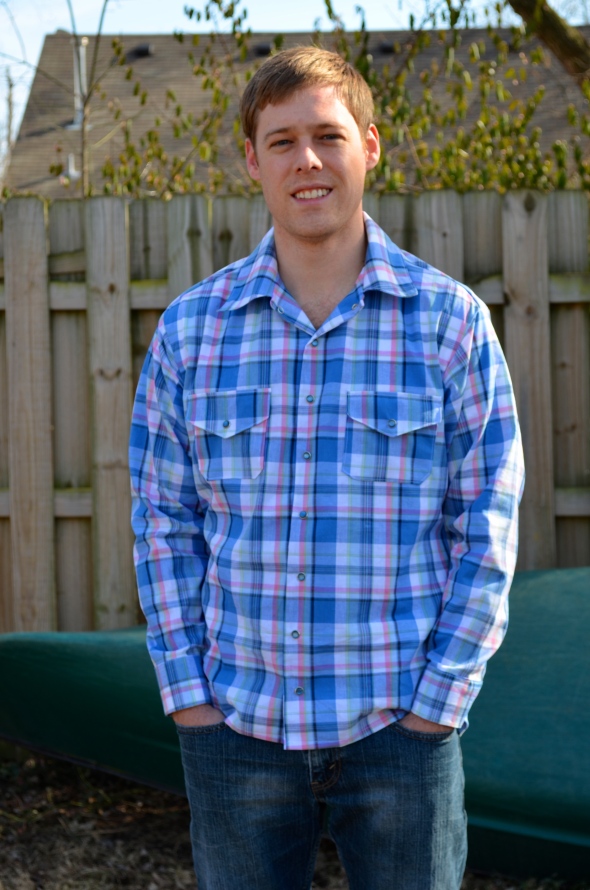 I have made several shirt dresses so I was prepared for the process of making this shirt. The directions were easy to follow, but some of the piecing and techniques were new. I think the most challenging part was figuring out the back panel facing and the front placket piecing together. It was a bit of a cluster f*ck for a while but somehow it magically fit together like a somewhat complicated jigsaw puzzle.

I had two choices of plaid shirting for him to choose from and he picked this bold blue, pink and green plaid. I think it brings out his pretty blue eyes. His measurements were right between a small and medium, so I cut the shirt in medium and decided to just size it down from there. Some of the changes that I made were taking in the sides so that the shirt would taper in a bit more at his waist. He has a long thin torso so the shirt was slightly too baggy. The sleeves were also a bit too baggy and reeeally long. I took in the sleeves and cut about two inches off the sleeve length. I think I might have made them a hair short but they don’t look bad and he only complained a little bit, so lesson learned for next time. He is picky about the length of his shirts, and since this is a more casual weekend shirt he wanted it to hit right at his waist since he didn’t plan on tucking it in.

I cut the back yolk against the grain so that the plaid would face the opposite direction. I love how it turned out! Chris had wanted me to add opposing plackets to the front which would have looked pretty groovy as well but unfortunately I didn’t have enough fabric to pull it off. I wish I had done the pockets like this as well but whatevs, maybe next time. 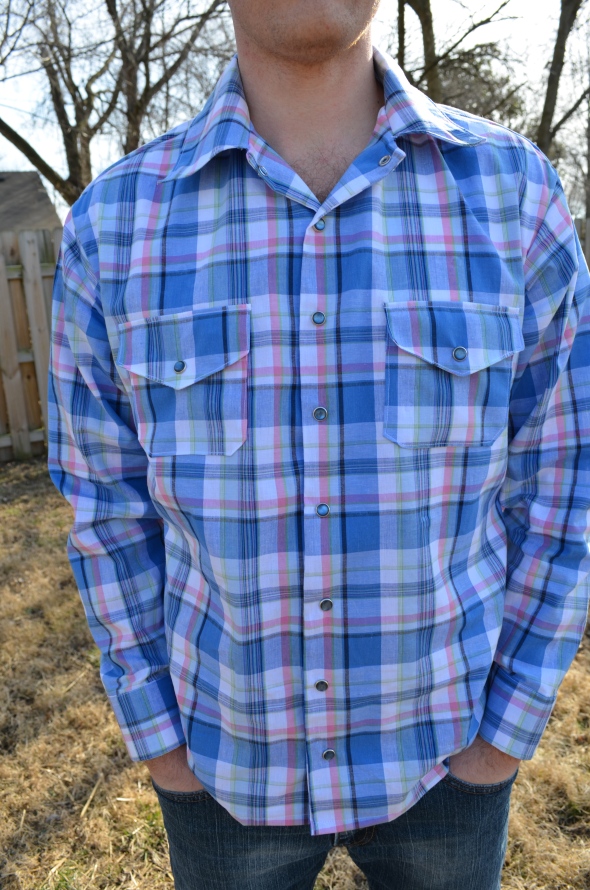 I used snaps instead of buttons, he just doesn’t have enough snap shirts in his closet! I had a few snafus while installing these, I was enjoying a glass of wine while putting them on the shirt and I somehow hammered the wrong pieces together TWICE… luckily Chris is super handy and he busted out his pliers and removed them with no rips or crying from me. What a guy! he saved his Negroni! There is one snap towards the bottom that is slightly off, but I am so over messing with the snaps that he’s just going to have to deal with one imperfection.

In other news, our chickens are running around and laying eggs like crazy! I think we have four dozen eggs in our fridge, we can’t keep up with these ladies!

Here Chris is with our favorite chicken Jamal, she’s so sweet.

I would definitely recommend this pattern, he has already requested another one so looks like the Negroni will be revisited. I am hoping it warms up sooner than later so that I can make him sleeveless ones and not mess with those cuffs!