I found this paisley print by Michael Miller, called Posh Paisley. It comes in many different colors but I loved this bright pink one. I’ve had this Simplicity pattern 2584 in my to do pile for a while and this fabric was perfect for it! Its a cute, casual dress that I can wear to work, hanging out on the weekends or for dinner and drinks. 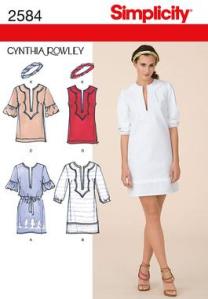 It was an easy dress to make, the most challenging part was the yolk (neckline) but I had a lot of fun putting it together. After lining the yolk section, I mtched the notched sections and dot and sewed it onto the dress. After fusing the interfacing to the lining and sewing it to the outside, I sewed two straight lines down the center, and you cut all the way down between these to create the neck opening. The lining gets inverted to the inside, and then you just iron it out and it completes the collar. It was almost like a magic trick!

The sleeves were made by sewing in an inch wide channel and pulling through elastic. After trying it on, I fit the elastic to my arm so it wasn’t too tight or too loose. By itself, Chris thought this dress looked like a night gown. This was pretty annoying but I’ll admit (especially in this pic) that without a belt and some cute heels it does kind of look like something your granny would bust out.

I really like this dress, and I would definitely make it again. The pattern came with different variations so the next one I would try would probably be the version with the puff sleeves and tie waist.

So I tried this new Cynthia Rowley pattern from the new Simplicity 2011 Summer collection thinking that I could wear it out for a Bachelorette party in May and yeah… so much for that idea. This pattern is so strange and ended up being so asymmetric, perhaps it was the crinkle gauze material I used which I have not worked with before, or maybe it was all the weird random pleats and gathering, I don’t know but it ended up being a hot mess.

In the photo on the pattern it looks a little Grecian Goddess-esque which I thought was pretty, but my finished product didn’t look like this in my opinion. The fabrics they called for ranged from linens, laundered cottons, and crinkle gauze to satins. In hindsight the satin may have been a better option for this dress as it woud have been more sturdy and clean in the pleating and gathering. The bodice came together pretty easily, the strap construction used interfacing and wasn’t too out of the norm. Then I made the Midriff waist section which somehow came out way to short. I used the same measurement on all pattern pieces but ended up having to recut this section longer, luckily I had enough fabric left to make these long pieces.

Next I made the weird skirt. It had one slit at the top of the waist (imagine a missing slice of pizza) this was to make one random dart. Umm alrightie… Then the pattern had gathering on one side near the dart, and then just folded pleats on the other side. Maybe I just messed this up somehow but the skirt ended up being so off center. If I could go back I would have skipped the gathering and just made plain and simple pleats ignoring the instructions. The hem was also strange, it had a ring of interfacing that was sewed around the bottom with facing. I guess this was to create sort of a hoola hoop effect and make the skirt flare out. Mine of course ended up being uneven in the back- hey why ruin my asymmetry theme?

Here is the full view of the dress. I am going to quote the movie Clueless and say that this dress is full of Monet, from far away it looks ok, but up close its a big mess.

In the end I could probably wear this dress out to a dark bar where people would be drinking and no one would even notice the imperfections, however for the experience and issues I had making this dress, sorry Cynthia Rowley I love you but 2178 gets a thumbs down. <PPHHHHTTTTTHH!!> 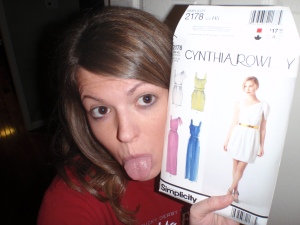