My husband’s birthday is in a week and he is turning the big 3-0 this year! We are going on a trip to West Virginia next month for a big kayaking festival called Gauley Fest, so I wanted to make him something that he could use when on the river. It is still a little warm out for him to use the union suit I made last year, so I found Kwik Sew 2881 which is a dry top that he can wear under his dry suit. Check out the hunks on the envelope, maybe I should make him the undies next time! hee hee…

Anyhow, I found some black spandex bathing suit material at Hancocks, the pattern didn’t call for much, this top only called for about a yard. After making the union suit which was a similar pattern, I didn’t want it to come out too small so I cut it extra big so that I could size it down to fit him. I ended up cutting it quite a bit since he likes these to fit a little bit snug.

I serged all the seams and went back and serged around the neckline after sewing it to fit properly. Since this is going to get wet it needs extra reinforcement, especially for what he will be using it for. I don’t think this fabric has a tendancy to unravel, however if stretched too far I think it could tear.

The shirt ended up fitting him properly, however all the cutting and sizing down made the finished product less than professional looking. The side seams were a hair short to match up with the shirt bottom, which was ok but I am a bit of a perfectionist so it annoyed me. This showed the serged seam at the bottom too, but I guess since he is wearing this as a layer underneath his dry suit on a river so ultimately it doesn’t really matter. He said he liked it and he would wear it kayaking, so I think he likes his birthday gift! 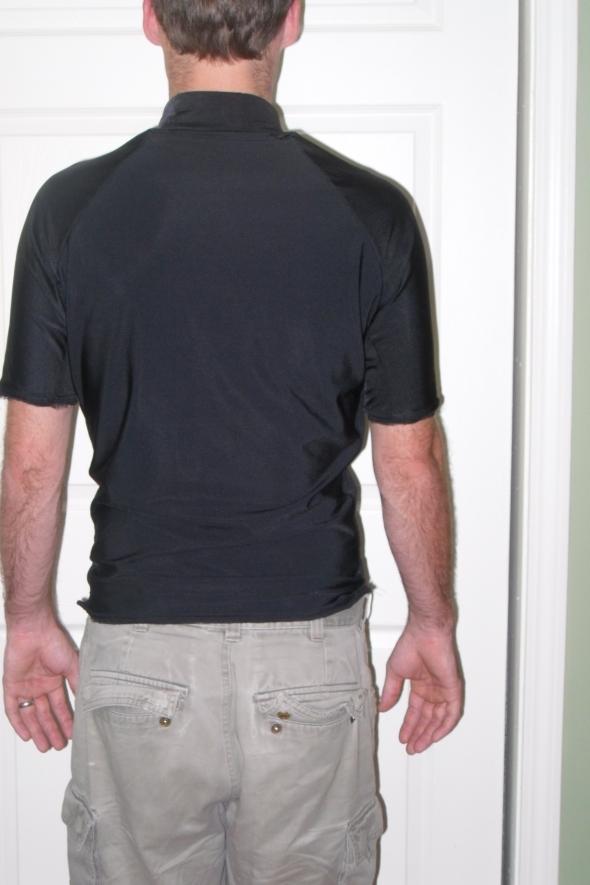 Happy 30th Birthday to my favorite guy! I ❤ You!

A Union Suit for a hot Kayaker

My husband’s most passionate hobby (much like my sewing/craft hobby) is kayaking. And I mean serious kayaking, he throws himself down class 5 rapids in tiny little playboats- thank goodness he has a good life insurance policy. Hee hee, I kid, I kid! Anyhow, he goes kayaking all year long, all around the Southeast where the water is running. Needless to say, the water can get COLD no matter what time of the year it is. So he asked me to sew him a Union suit, it is a stretch full body suit that he wears underneath his dry suit to add an extra layer of warmth. He actually got online and found this Kwiksew pattern 2335 to use as a template, its pretty much a wetsuit but clearly this pattern has been around since the 90’s judging from the neon green and electric blue color they used.

Lucky for him I let him pick the fabric he wanted to use or he would’ve ended up with a 90’s hot pink version. He found a synthetic rayon/polyester blend material (in solid black of course) not waterproof but would absorb sweat and provide some insulation. It was surprising easy to sew, Kwiksew patterns are very clear in their instructions. I did end up using bright orange thread which actually looked pretty cool, gave it a sporty look. The most fun part was putting in the 24″ zipper, I used a sports version but they do have waterproof ones. It turned out good though a little snug and short, this is just the prototype though according to Chris.

For the next one he wants to order Neoprene which is a rubberbased fabric that flicks sweat away from your body. Our good friend DJ who is also a big kayaking enthusiast is in line for one too. 🙂 Here’s a picture of Chris in action.

He has used his Union suit for 2 boating trips and it has kept him nice and toasty!