As I was putting up my Christmas tree this year I noticed that I really don’t have many other Christmas decorations for our house.  We don’t even have a wreath for our door anymore, it somehow disappeared over the years. This made me a little excited however, because McCalls had a $0.99 pattern sale a few weeks ago and they have so many cute Christmas crafts! Our house isn’t very big so I picked out decorations that would fit into specific spots in our house and I really wanted to make a wreath for the front door. The Santa wreath on the McCall’s pattern 5205 was sooo cute, I had to make it (even though it looked pretty complicated). He ended up being fairly step by step easy to follow, but very time consuming and used all sorts of different fabric, remnants and other craft materials. 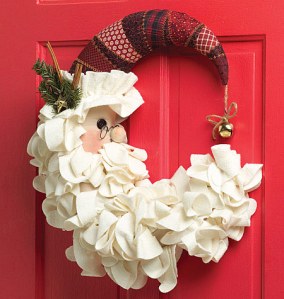 And here’s my version hanging on our yellow door: 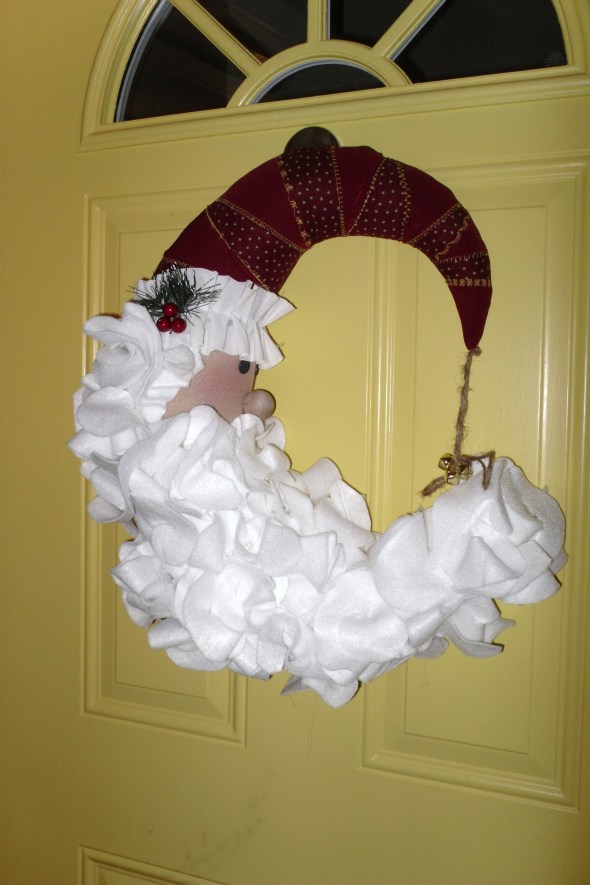 Besides the pure time alone I spent cutting out all the tiny pieces to sew and glue, the patchwork hat probably took the longest amount of time to sew. The pattern called for decorative stitching to sew the pieces together. Although I could have omitted this step and just sewed them on with straight stitches and called it a day, I thought the decorative stitches gave it much more depth and character. The beard also took a fair amount of time, it was made of 32 round circular curlicues that each had to be sewed into loops and hot glued individually. I ended up cutting a few extras to fill in bald spots and in the process I think I have third degree burns on my fingers. That part really sucked!

His eyes were blue buttons that I had, they were smaller than the ones the pattern called for but oh well. I thought it was strange how the instructions said to sew the button eyes on but then you turn around and glue his wooden ball nose on… it would be much quicker to just glue them all on at once, but hey what do I know? I substituted the little star ornament and just cut up a fake branch of pine needles and holly which were at the craft store for under a $1. 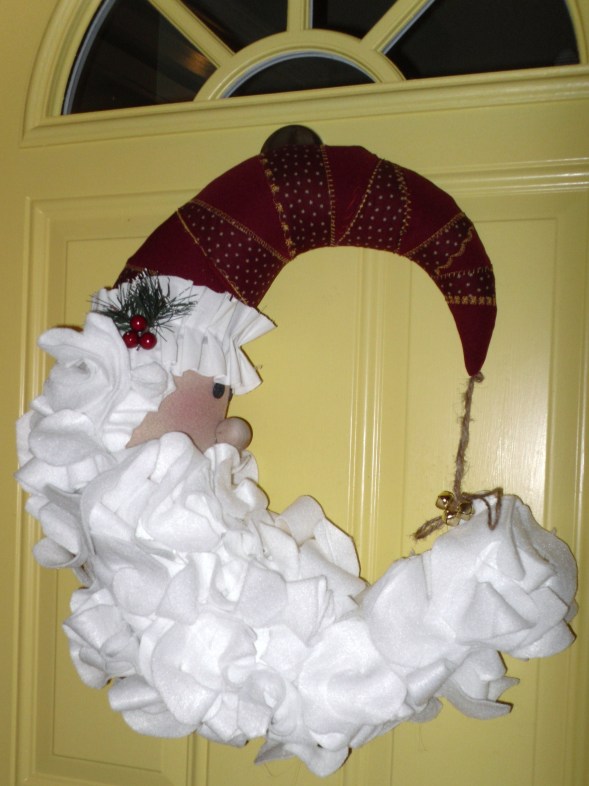 I couldn’t find little glasses anywhere so for now this Santa has 20/20 vision. My favorite part of this Santa was putting real blush on his cheeks to make them rosy. 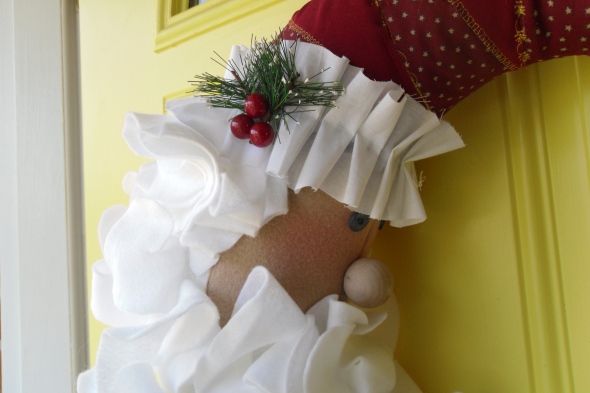 Despite how much time this project took, I totally had a blast making it, and I would definitely make it again as a gift for someone worth the time, like my Mom. There is a witch version for Halloween included in the pattern which I plan to make next year for sure (she looks much less time consuming too).

For my next project I wanted to make something for the kitchen, and I noticed the little gingerbreadman and santa chef dolls on McCalls 6219. These seemed like they would be much quicker to make since they were much smaller, however these little guys also had many little pieces and steps that soaked up some time. The gingerbread man went quicker than the santa doll since he was more or less one big piece and the apron and hat were the extra separates to make. Santa had the boots, the pants, the shirt, head and hands that all had to be pieced together. Plus he had much more stuff to be glued on with his beard and hair, and the fur around his sleeves and boots. 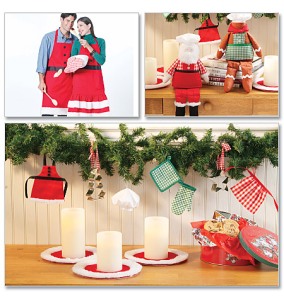 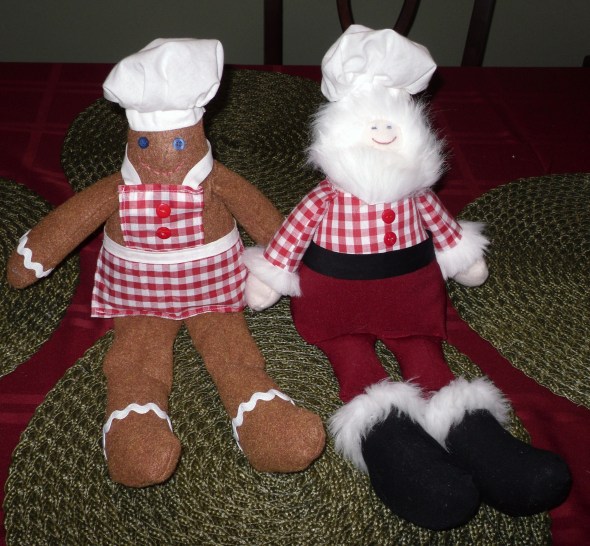 One thing that was odd about this pattern was that it said to draw on the mouth and eyes for both dolls, but I thought this would look kind of crappy and unfinished so I stitched these on. 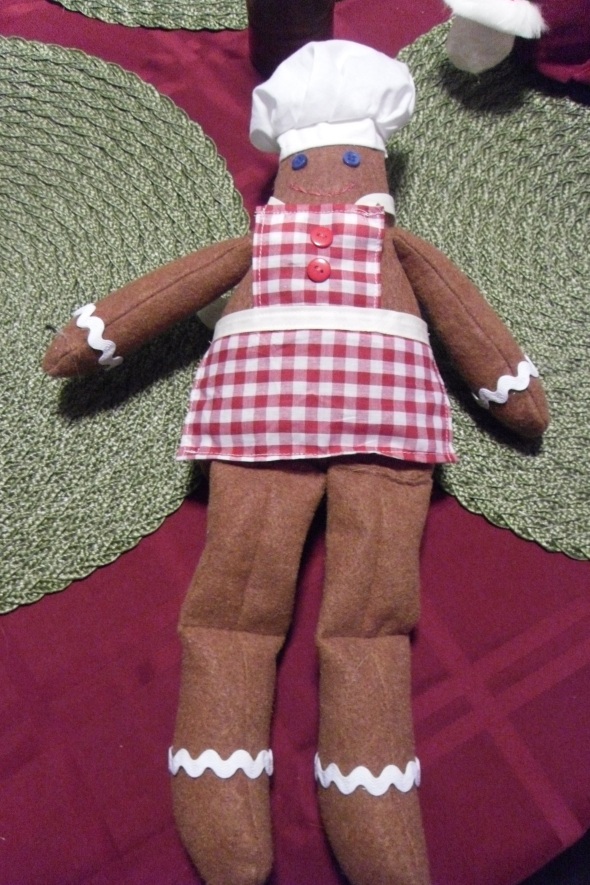 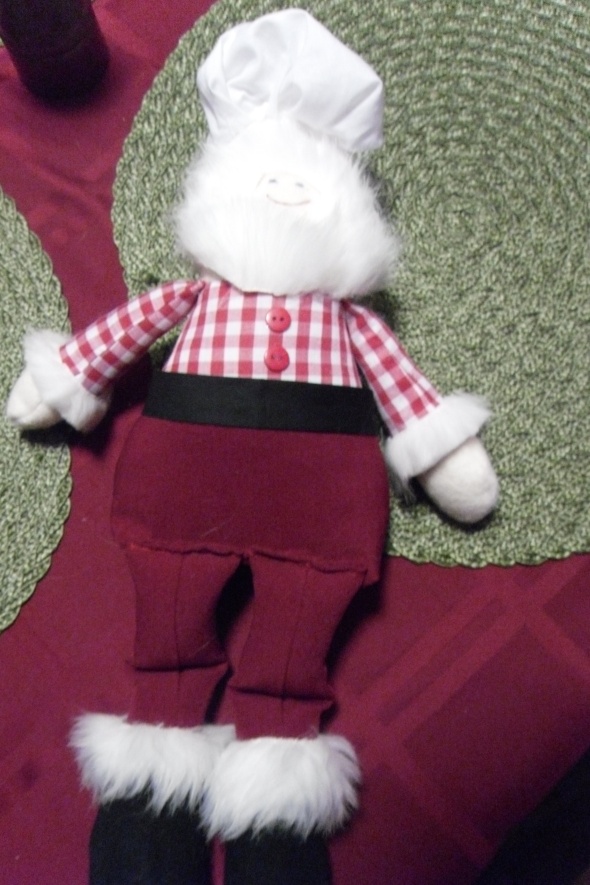 This pattern was also easy and fun to make, the only gripe I have is that there was a lot of hand stitching involved, the legs, arms and hats all had to be hand stitched on to the dolls.

Finally, I wanted something to put up on our breakfast bar that would be more of  bigger centerpiece, and I saw a review on this Christmas tree on McCalls 3777 so I gave it a shot. This pattern also came with a tree skirt, ornaments and a stocking so I think I got more bang for my buck (literally, a buck). This was a super duper easy pattern, just cut out 6 trees from your fabric, 3 each contrasting and then you just sew them all together straight down the center and stuff them. I used red and green velvet material. I omitted the lace on the edges and added jingle bells on the branches instead. This was such an easy and cheap decoration to make that I made one for my friend Katie as a Christmas gift. She is a University of Kentucky fanatic so hers is of course UK themed. 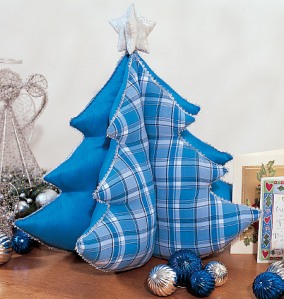 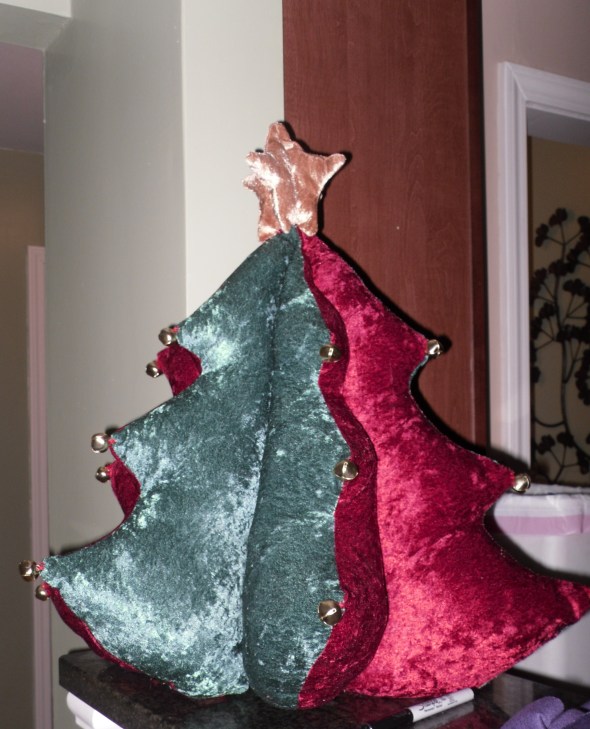 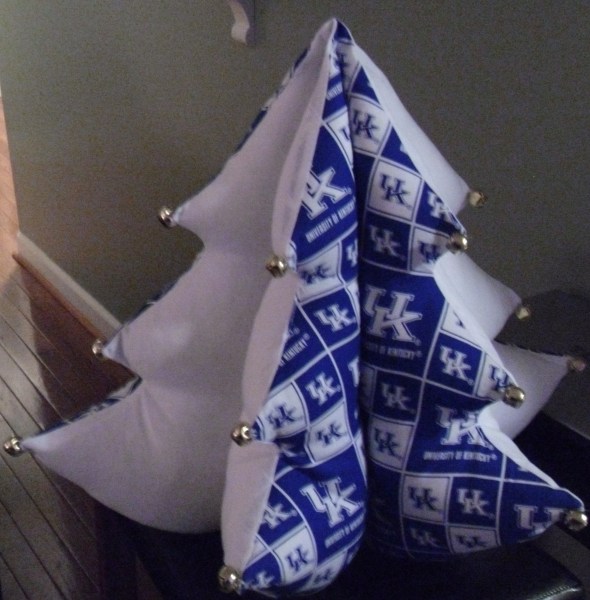 I think that the cotton or more sturdy fabrics are better suited for this project since they don’t stretch out when you stuff the tree and they maintain their shape.

I had so much fun doing these Christmas crafts but at this point I am all crafted out for a while! I am looking forward to some new projects I have lined up, one of which is a coat. I have never made one before so this should be a new adventure for me!

This year for Mother’s Day I wanted to make something special for my wonderful Mother in Law. She is a fantastic sewer and seamstress, and makes the most beautiful drapes and window treatments, and recently started doing her own upolstery completely self taught which is amazing! She is also a good cook and she wears fun aprons in the kitchen, my favorite one is her Mrs. Clause apron at Christmas time. I decided to make her a chicken themed apron, since I know she grew up around chickens and loves a good old eggs over easy in the morning! Here she is whipping up something tasty! 🙂 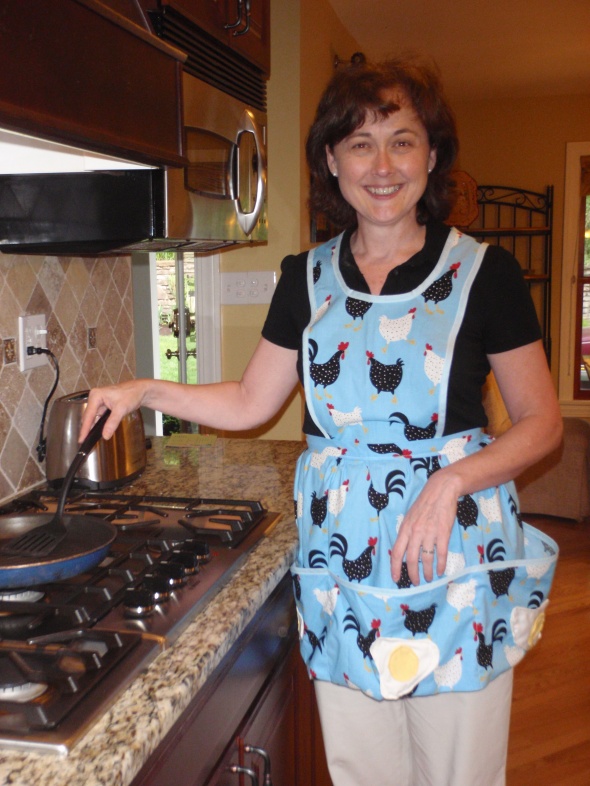 I used the Simplicity 2272 pattern, and it was a really quick sew. The edges were binded in double fold bias tape which I found in a light blue to match the chicken fabric. The rest of the apron was just fabric, no interfacing or lining needed. I did sew the waist band differently then they suggested in the instructions which seemed a bit backwards to me, they had the band sewed to the apron first, then folded in half right sides together, stitched and turned inside out. I don’t really see how that is possible with the apron sewed on, so I just pressed the tie edges in and sewed the whole piece together at once. No struggling!

I decided to add some egg yolk decals to the pockets, Chris was throwing away an old white button down work shirt so I fished it out of the trash and cut out some egg whites, and used remnants from my yellow dress fabric to make the yolks. 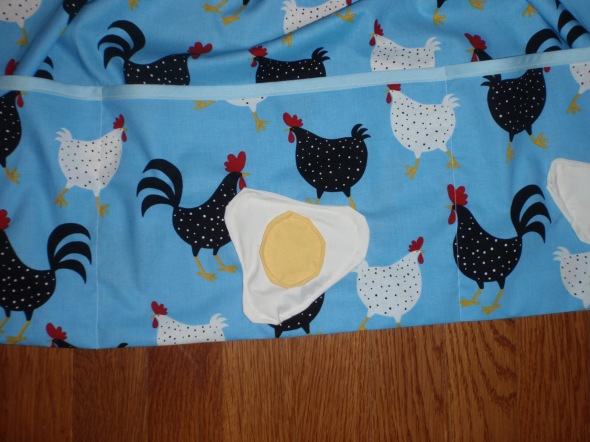 In the end it turned out really cute and versatile,  and I would definitely make this apron again! 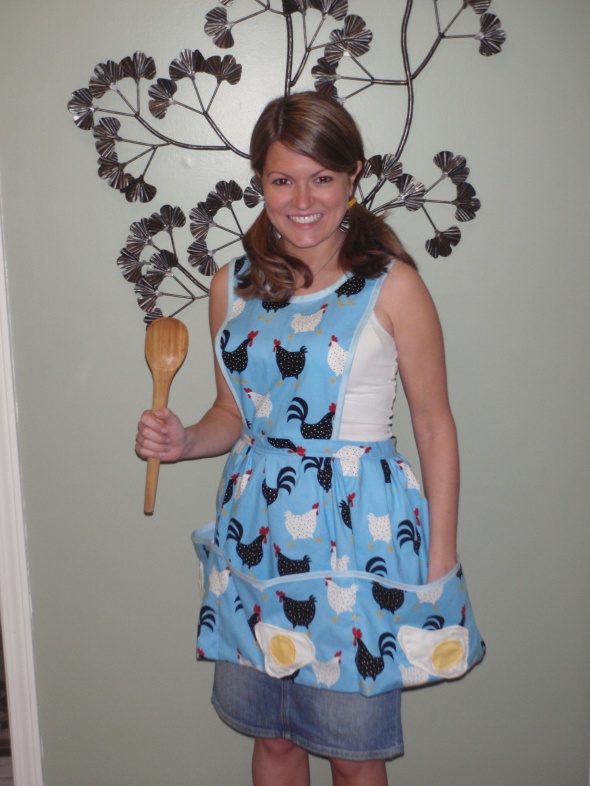