This top has probably been sewn up by everyone and their mother who owns a sewing machine so I am a little behind the times on finally getting to this one. This little top ended up being a whole new experience for me though since I have never really done French seams before, this entire shirt was made with them. They really aren’t difficult at all, but man oh man were they time consuming! You have to bust out the iron after every stitch to press the seams down and you essentially sew the whole thing twice since you have enclose every stitch. Mine turned out okay with it being my first time, but I could definitely use some perfecting. 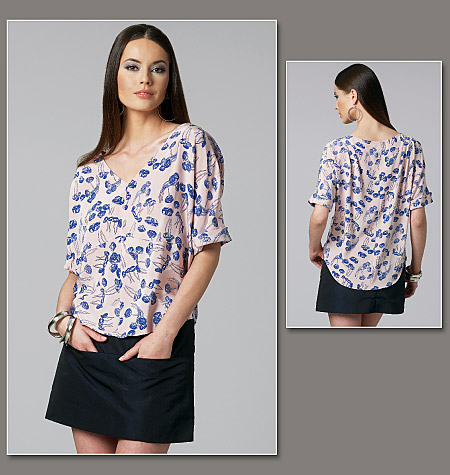 All the reviews I read said that this top has a tremendous amount of ease so I cut this a size down. I wanted to leave a margin for error but if it this had come out huge I probably wouldn’t wear it.  I think that this came out really short, I am not sure if maybe that just happened with mine by mistake. I have seen other versions if this where it was tucked into pants and pencil skirts but this just hangs low enough to cover my belly. Perhaps I was too generous in my seam allowances…

I also had some trouble lining up the front seams where the triangular sections met in the middle. I thought about ripping the stitching out and redoing this, but french seams are double the work in both construction and destruction so I decided to be lazy and rock it out sloppy. The flower print is so busy on this charmeuse that it isn’t too noticable (or so I hope!)

Over all I dig this top, next time I will probably go for a solid and attempt to add some length to the front.